In these waters, oysters flourish. The real pampering comes with handling and processing the oysters.
By perfecting these steps, we are able to get our oysters to your dinner table or local oyster bar fresh and full of flavour. 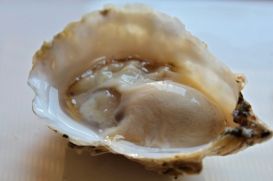 The FLUPSY- a silly sounding word for such an advanced machine. This is where the oyster cycle begins.  These Floating Upwelling Systems draw water up through bins using a large paddle wheel, creating a fast moving tide flow which feeds the oysters 24/7.

All Paradise oysters start as seed, which is half the size of a popcorn kernel.  In the beginning, one bin will hold 1-2 million tiny oysters, which come from the nursery at the fragile size of around 1/16th of an inch.

Once the oysters reach 3/8 of an inch they are run across a power screener, which starts the process of shaping the oysters by removing the soft outer frill of the shell. The cycle of screening and tumbling works towards building a stronger shell that is easy to shuck and creating a nice deep cup to support the meat of the oyster.

At ¾ of an inch, the oysters are ready to leave the ‘flupsy’ and be transferred to the farm, about a five-minute boat ride away. Once at the farm, the oysters are placed into trays stacked 15 high and lowered into the ocean where they are hung from oyster rafts anchored in deep water off the farm.

Every six weeks, the trays are lifted out of the water and the oysters are sent through the ‘tumbler’, which conditions the oysters by breaking off the soft frill of the shell.  The oysters are placed into a ‘hopper’, carried up a conveyer belt and fed into the tumbler where it can be conditioned and sized using various wire meshed screens. The more times the oysters are tumbled, the harder the shells will become while forming a desirable deep cup.

The Oysters are replaced into trays and put back into the water to continue their growing process. After the tumbling process has been repeated three to four times they are ready to be sorted for market. 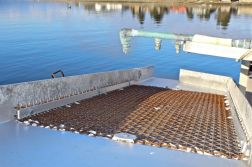 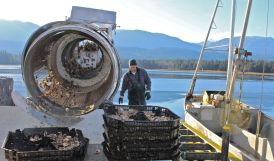 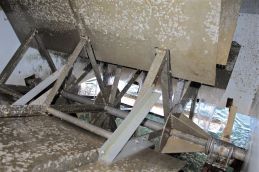 Paradise Oysters are sold as singles,

One thought on “The Oysters”